In honor of creative director Erik Andrade being selected to perform at TEDx New Bedford, La Soul Renaissance  is curating two nights of culture with live art, music, spoken word poetry, hip hop, and community building on Friday October 23rd at the Pour Farm Tavern and Saturday October 24th at No Problemo’s.The audience for both events is mature 21+ and geared towards  artist, poets, emcees, activists, spiritual truth seekers, dreamers, and fans of a good time. 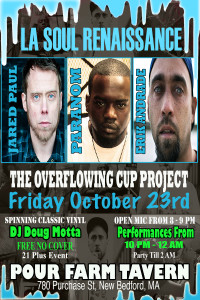 city at the Pour Farm Tavern and Grille  780 Purchase  St. Downtown New Bedford. The event is free of charge with no cover charge. The night will begin with an open mic from 8pm – 9pm  for spoken word artists, poets, artist with an enlightening message La Soul Renaissance encourages uplifting and truth telling poetry posed with passion, purpose, and thirst for peace and prosperity for all.

Following the open mic from  9-10 PM our vibe be set  by DJ DMott as he spins and all vinyl set. Mixing and eclectic collection of soul, funk,  and classic underground hip hop. Think lounge  setting the vibe with an intentional space for for communication, community building, networking, dancing and getting ready for an amazing live show.

JARED PAUL AS AN ARTIST

Having toured internationally in over 200 cities throughout the United States, Canada, and Europe playing alongside legendary poets, musicians, journalists, and speakers such as Amy Goodman, Saul Williams, Bill Clinton, Sage Francis, Our Lady Peace, Paul Hawken, Jello Biafra, Immortal Technique, Anti-Flag, Atmosphere, The Misfits and many others, Jared is widely recognized as one of the premiere performance poets in the world. His work has been featured on the Canadian Broadcast Company program, “Zed TV,” as well as in CMJ Magazine and The Providence Journal. Jared is a two time Individual World Poetry Slam Finalist and has been a featured poet at the Greenbuild International Conference & Expo, the Post Secret national book tour, South By Southwest Music Festival, and Net Roots Nation. He was also the headlining act for the 2009 Karl Wilhelm Diefenbach grand opening at the nationally acclaimed Villa Stuck gallery in Munich, Germany.

“Jared Paul is a stunning performer – staring audiences in the eyes and calling for conscious responses to injustice. His talent at sharing complex ideas through verse should not be missed.”
-The Eureka Times Standard

PARANOM AS A PERFORMANCE ARTIST… 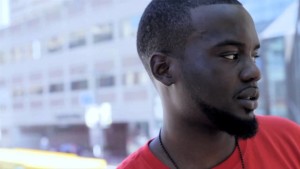 Germany, Austria, and Greece. While overseas his hit “Microphone Phenomenal” peaked at the #1 spot on Europe’s Underground Hip Hop chart. Upon returning to states he has contained to released highly respected music with several successful project including Paranom 777 (EP) available for download at his website here

Additionally,  Paranom had the great honor of being awarded the 2014 “RAPPER OF THE YEAR AWARD” He will be performing in New Bedford fresh from his tour down to Atlanta where he performed on Hip Hop Music’s Biggest Stage at AC3 Hip Hop Festival.  Paranom is sure to leave the crowd in enlightened and caught up in the music, if your a fan of hip hop do your ears a favor and be sure to check out his special featured set at La Soul Renaissance The Overflowing Cup Project Friday October 23rd at the Pour Farm Tavern in New Bedford MA.

“Simply put, Paranom is your favorite rapper’s favorite rapper. On his Wreck Shop/SonicBids profile his sound is described as a soulful sound “akin to the likes of John Coltrane meets Black Thought meets Nas”
-Producers United

ERIK ANDRADE AS A PERFORMANCE ARTIST…

As a performance artist Erik was awarded 2012 SouthCoast Music Awards Poet of the year. He 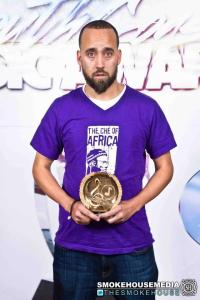 His poetry has been featured on over 15 recording projects, including the Foundation Movement’s Greatest Hits, which was awarded 2006 New England Urban Music Award’s “Best Hip Hop Album”. Additionally, in 2014 his poem “I Can’t Breathe (for Eric Garner) was published internationally on MixedWorldMusic.Com, nationally by CNN Headline News TV, and locally in the Standard Times.

Erik has presented nationally and internationally touring the Islands of Cabo Verde, Africa (Sal, Santiago, Boa Vista). The highlight of the tour being  performance Chachi Carvalho on the Ubran Stage at the 2014 Atlantic Music Expo in front of a crowd of thousands outside the Presidential Plaza downtown Praia. No stranger to large crowds and big stages Erik  has performed at Jazz Festivals, Connecting for Change Conferences and is currently is scheduled for a performance for TED talks at a TEDx New Bedford event November 6th at the Zeiterion Theatre (purchase tickets here) . 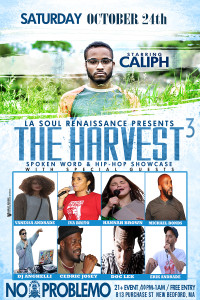 La Soul Renaissance would like to salute  Civil Rights Icon and Good Brother Jibreel Khazan (born Ezell Alexander Blair, Jr.; October 18, 1941). The Good Brother Jibreel is a civil rights activist who is best known as a member of the Greensboro Four; a group of African American college students who, 55 years ago on February 1, 1960, sat down at a segregated Woolworth’s lunch counter in downtown Greensboro, North Carolina challenging the store’s policy of denying service to non-white customers. They refused to leave when denied service and stayed until the store closed.The protests, and the subsequent events were major milestone in the African-American Civil Rights Movement

Dr. Jibreel Khazan is a brilliant and humble soul whom has blessed not only the world via his courageous direct action and civil disobedience 55 years ago today but in his day to day interactions with everyone his path crosses. Thank you Dr. Jibreel Khazan for all you have contributed to make the world a better place for all.  Happy 55th Anniversary!

Dr. Jibreel Khazan was also a keynote speaker at La Soul Renaissance’s Tearing Down the Walls along with Gloria Clarke, Ernesto “Eroc” Arroyo, Camille Viveros, and Ross Grace in 2004. The conference was designed to connect progressive people from all backgrounds and generations. 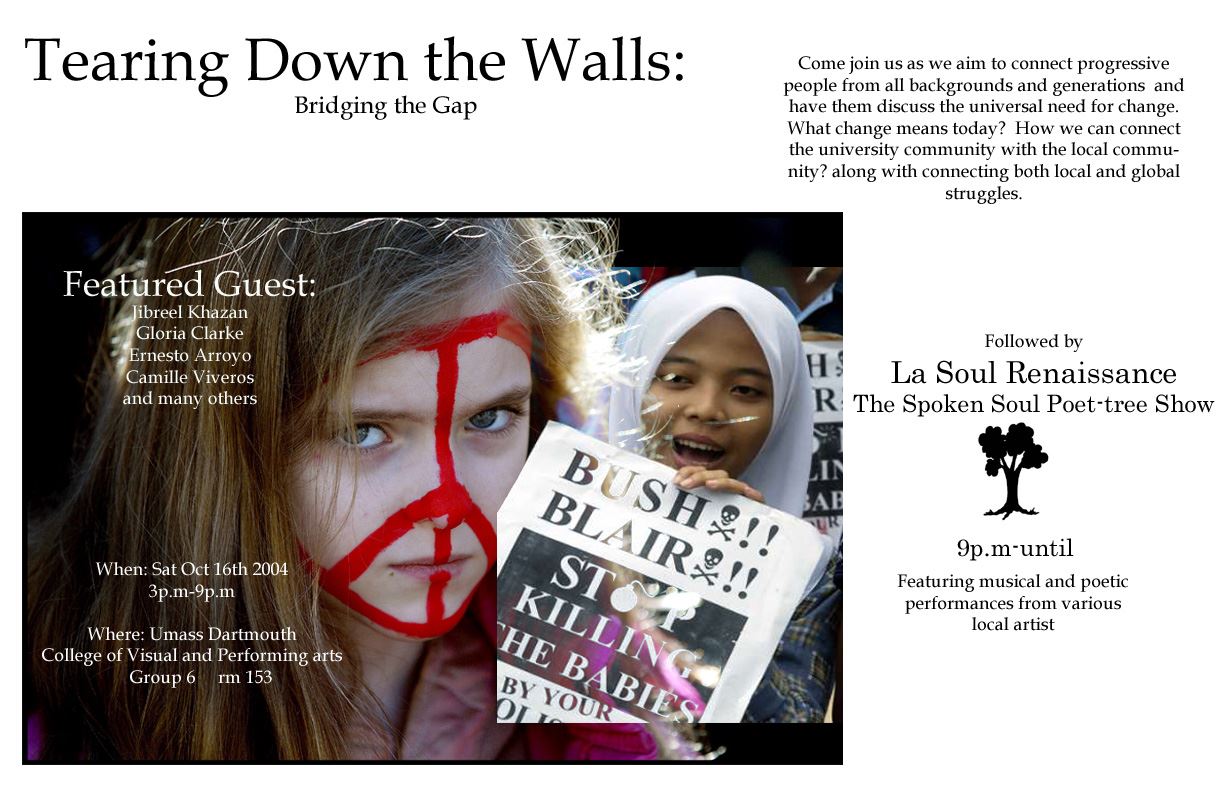 Good Brother Jibreel Khazan, May your peace, prosperity, and love continue guide and protect you and may you continue to be a blessing to all. 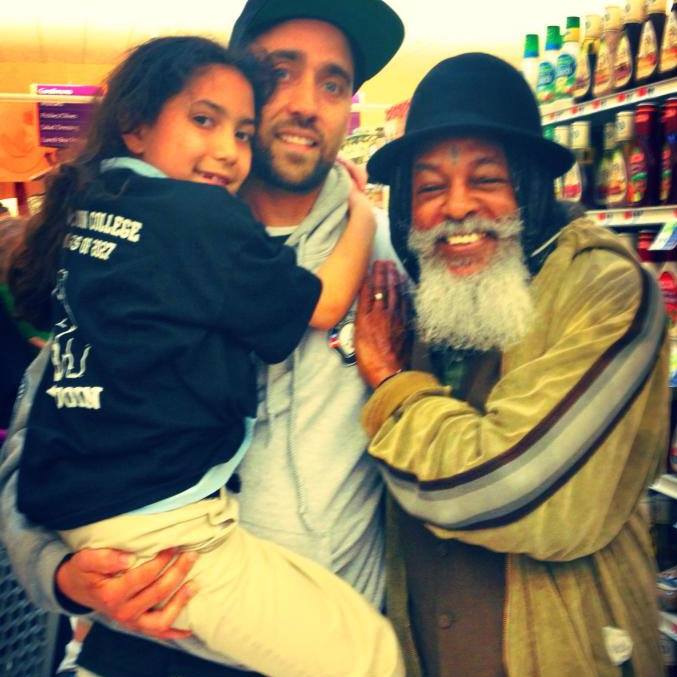 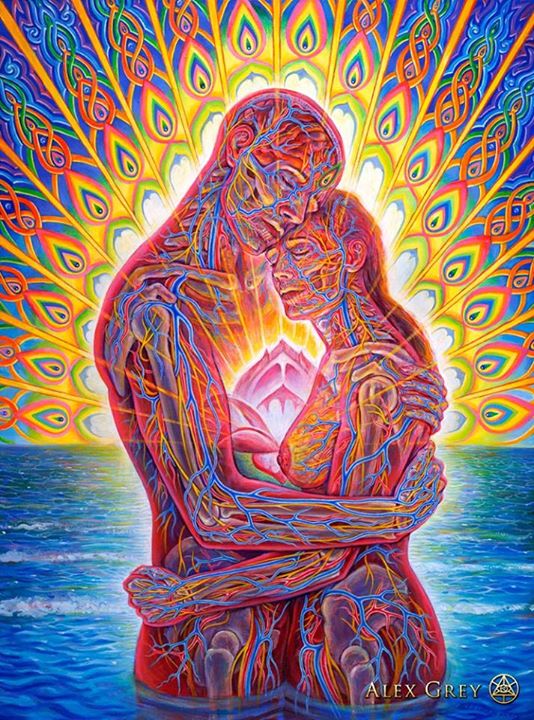 don’t get caught up

you should not care

what hides your skin

when you wake up

so one of a kind

a work of art