The event is one of 47 to be held solidarity worldwide on Saturday with the goal of raising funds for 500 water filtration systems for Flint, Michigan residents affected by the city’s ongoing water contamination and health crisis.

“Water is the most precious natural resource, so seeing the community of Flint struggle without this basic human need really stuck an emotional chord for many of us in the hip hop community,” said Erik Andrade, founder of La Soul Renaissance. “Hip-Hop 4 Flint New Bedford will showcase local hip hop and spoken word poetry talent on the world stage, while making a clear and tangible impact on the situation on the ground in Flint.”

The event is partnership with Queen Yonasda of HipHop4Flint and the non-profit Prince of Peace Missionary Baptist Church in Flint Michigan Each cities showcase will be live streamed on national media sponsor AllHipHop.Com, HipHopDX.com, as well as HipHop4Flint.com. 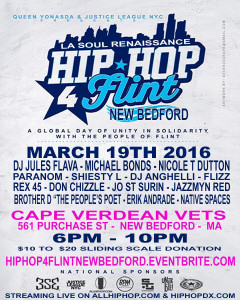